A rich picture is a way of representing the things what we know about a situation.- the issues, actors, problems, processes, relationships, conflicts and motivations – which creates a valid reason about these aspects. It is a graphical tool addressing the state of ambiguity at the beginning of any exploration or research about an issue. It is the first step in the process of assessment of a situation. It gives a clear idea about the entire scenario like what is the exact problem , what are the various factors related to it. By seeing at this we come to know the complete picture of the problem. This makes us to know that we are dealing with a problematic situation, and takes us to a state where we have identified one or more themes we want to deal with. Peter Checkland is the person who introduced the concept of rich pictures to the world. He is a British management scientist. He designed this for use in the early stages of his Soft Systems Methodology (SSM), an approach that recognizes that problems do not exist separate from the people involved in them and appreciates the multiple viewpoints of those participants. Essentially, SSM attempts to understand human systems in a way that is meaningful to actors in that system. SSM says that humans are the part of any problem or project that arises, they are no more separated. Rich pictures are tools to learn not only about the observable particulars of a situation, but also about the abstract or emotional things like the social atmosphere among the actors. This is called as a Rich Picture because it is very much rich with the information.

Soft Systems Methodology(SSM) is an methodology used for organizational process modeling. This is used for both general problem solving and also in the management of change. This works on the concept of system thinking. System Thinking is a concept that explains that the component part of the system will act differently when it is isolated from its environment.
.

Constructing rich pictures can reveal all sorts of questions and observations about the problem situation. The value of rich pictures becomes particularly clear when we share it with others, identifying different perceptions of and assumptions about what is going on. That is when we can see connections, dead-ends, possibilities and contradictions that we may have otherwise missed. It can be difficult to face other people’s often surprisingly different assumptions, because this exposes us to the demanding task of questioning our own. It can mean throwing away the solutions we thought we had, going back to the beginning and starting anew. Of course, that is often exactly what is needed at the start of a systemic inquiry.

The aim of this rich picture is to make a pictorial representation of the elements that need to be considered when inquiring a problem, like the stakeholders and issues, the interactions and connections and links between them. This picture can identify the points that are to be monitored, the pin points, the change agents, the change effects , etc.,

Rich Pictures are helpful in identifying the open loops in the system and also the redundant ways of checking at the early stage. Major issues will show up relatively easily. It can be a useful tool to compare the differences before and after process review.

Rich pictures are drawn at the pre-analysis stage, before you know clearly which parts of the situation should best be regarded as process and which as structure. 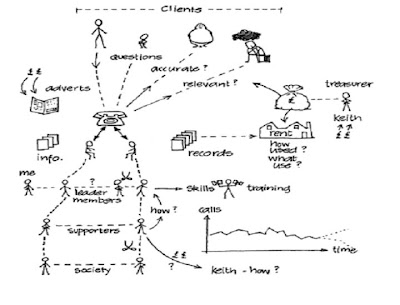 Part of a rich picture of a telephone helpline situation

Rich pictures or situation summaries are used to depict complicated situations. They provide us with a summary of the situation that you are going to handle. They are an attempt to encapsulate the real situation through a no- holds-barred, cartoon representation of all the ideas covered already layout, connections, relationships, influences, cause-and-effect, and so on. As well as these objective ideas, rich pictures portray subjective elements such as the character and characteristics, points of view and discrimination, spirit and human nature. If you are working with a client you should try to draw these from the actors themselves, at least initially, rather than focusing on your own interpretation of the situation.

Elements of the Rich Picture: 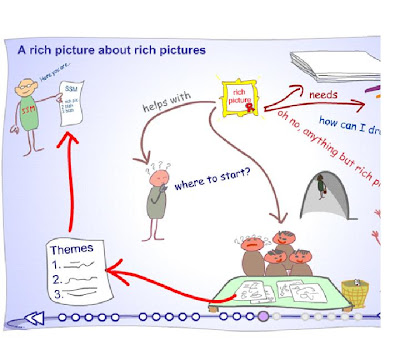 Begin with large sheets of paper and lots of coloured pens, and then simply draw what you see happening. Draw all that you perceive as problematic or significant - emotions and relationships as well as groupings and connections of various sorts - using symbols and metaphors to represent the situation in a way that is explicit and understandable by others. A rich picture can cope with whatever chaotic mess of thoughts and perceptions flows onto the page. Rich pictures do not have a formal syntax, and different people take different approaches, but these general guidelines have emerged as being useful:

A useful way to start a high level analysis is to identify players in the process. A quick and simple method is to use Rich Pictures - example below shows the players and the key interactions between them for the following simple tea-making scenario: 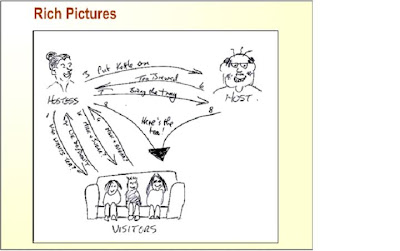